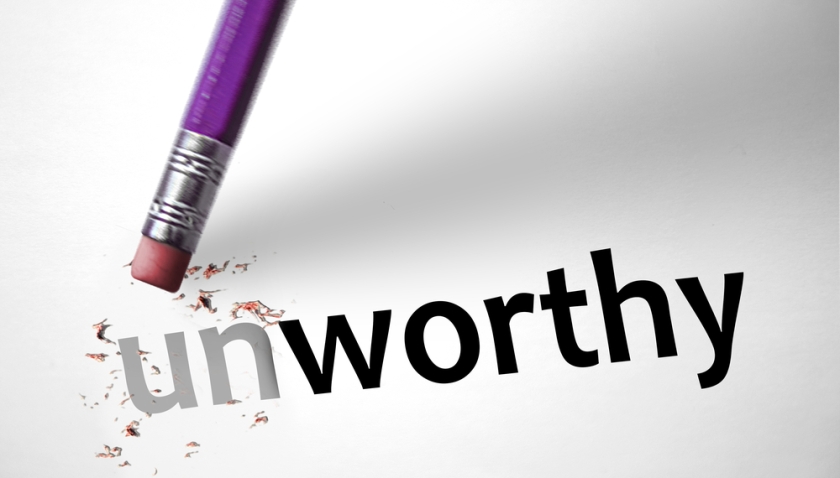 I am reminded today of how unworthy we are.  The Lord knew we were unworthy, so he died for us in order to fill in the gap for us.  First we have the law, man’s transgression against the law, separation from God, and then came Jesus.  He became sin, chastised and punished, so that we can be reconciled.  He knew we were unworthy.  He loved us despite our unworthiness.  Now we have Christian brothers and sisters casting stones at each other, they are saying, “you are unworthy of me!  You are unworthy of my time, of my energy, you are a leech upon my life.  You do not treat me with respect.  Depart from me, you are unworthy!”  They say these things because people generally are unworthy, but those casting judgments are not any better.  The Lord is showing me as I seek him about being rejected by friends who have said to themselves that I am unworthy.  I said something they didn’t like, so now I’m unworthy.  When we say a person is unworthy, we are saying to them, “you are not good enough for me, you do not measure up.  You do not deserve my attention or my love.  Depart from me”.  This has happened so much that it is evident that the Lord has a lesson in it.  So I asked him why, he told me that his people don’t know how to forgive.  They have their own expectations of what is the right way, as a matter of fact a friend shared with me a scripture in Proverbs where it says that every man thinks that they are right in their own eyes (Proverbs 21:2), but their way is not right when they judge others as unworthy.  That is the truth.  What is worse is that as I have sought the Lord in how to deal with these people who are now unworthy of my effort, in my own spiritual pride and feelings of rejection I want to move on and wipe the dust from my feet, but Jesus said, “no, forgive them”.  I told him that these people don’t even want anything to do with me, why should I pray for them to change their hearts.  He told me that it was wrong for them to settle in their hearts to not forgive, and that their rejection of me didn’t mean that I was unworthy, it meant that their judgement was wrong, and that there is no person who I am going to have a relationship with who I won’t at some point in time have to walk in forgiveness.  Jesus was surrounded by people.  He had devoted disciples, and he also had many more followers and admirers, yet when push came to shove, he was truly alone.  They didn’t love him because they were good people, rather they loved him because he first loved them and had something to give them.  He had a little piece of God in him.  Jesus couldn’t count on a single one of them to truly love in at the end.  When he hung on that cross, even God turned his face from him.  He was utterly alone.  We are to love people because they need it, not because they are worthy.  We are to forgive people because they need it, not because they are worthy.  In the end it isn’t about who was right or who was wrong.  In the end we are all imperfect.  In the end, what will matter is that we loved and that we are loved by the only one who ever truly loved us in the first place.  God is the one who is worthy.  Even Jesus was his design and his gift to us.  God gave him up.  It is time that we believers start showing the world a little piece of Jesus.  It is time that we start seeking deliverance from unforgiveness.  It is time that we rid the words “unworthy” from our vocabulary unless we are discussing our own worth while bowing at God’s feet.  It is time that we see that there is no person who is worthy, and at the same time every person is worthy because Jesus said he was.  If Jesus said that person was worthy, God forbid I ever say that a person is unworthy again.  Lord Jesus, please help us get this revelation.  Please help us have genuine love. Thank you for making us worthy even though we were not.  Thank you for loving everyone God.  We are worthy now because you said it, though we are all unworthy.

I’ve found that some of our most destructive patterns occur in the midst of pain. When we get angry, hurt, offended we become defensive and in an attempt to defend ourselves we can say mean and hurtful things to others. We didn’t mean it that way, we hope they will forgive and understand us. In time they might. Some wounds can take a life time to heal. Yet there is hope. There is a way around the destruction that wants to destroy our friendships, relationships, and our homes. We can obey God even when it hurts. We can seek out his answers to our pains, and be willing to be objective to our pain, rather than offensive while in pain. Take the time to hear the other side. Listen to their pain, understand their sorrow, even when it hurts. In 1 Corinthians chapter 13, what we call the love chapter in the bible, the first descriptive word that is given to define love, is patience. Love is patient. Love does not need absolution right now. Love does not need its own needs met right now. God is the greater judge and he sees all, and he promises that when we sow seeds while we have sorrow, our harvest will be joy. Love bears all things, hopes all things, believes the best. It is patient and kind. It listens. It considers the other person. It puts its own feelings and thoughts aside so it can be the healing salve for another. If that person needs space from you, then pray they will find the care and comfort they seek. Pray they will be protected, well fed, and nourished. Love believes the best in every person. Love conquers all. Love is not self-seeking. It does not count another’s faults. Love, even when it hurts, and we will reap our reward, even if it is only helping another through their trials.